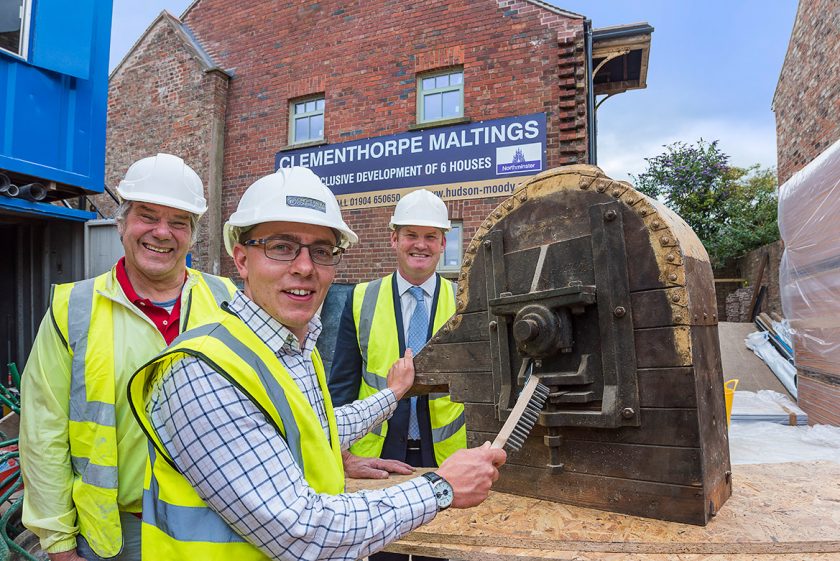 WORK is underway to create what might be the first specially-designed display area for industrial artefacts in a UK housing scheme.

York property developer, Northminster Ltd, is working with The Association for Industrial Archaeology (AIA) to conserve historic brewing artefacts at Clementhorpe Maltings, York, which it is converting into six  townhouses in a £2m regeneration scheme backed by City of York planners.

The former 19th century Grade II listed maltings house, which was disused for half a century, is among only a few to have survived and is even rarer for still housing the original maltings artifacts including a double-bucket elevator, a large hopper for grain storage, a seed-dressing machine, a cast iron steep and furnace.

Tadcaster Tower Brewery Company, founded in 1882 with the amalgamation of three local breweries, used the 10,000 sq ft maltings house from 1895 until the late 1950s.

It is not known exactly how old many of the artefacts are but the seed-dressing machine dates from the 1920s and was built by agricultural machinery manufacturers, Nalder & Nalder Ltd, Wantage, which ceased trading in 1959 after 102 years. Other original historic features such as timber trusses, malt bin doors and steel mesh used on the drying room floors are being re-used as design features in the redevelopment.

Northminster Ltd is creating the display area in a communal entrance to the houses so their owners and visitors can enjoy them as they walk in. Many of  the items, which are being left in place, will also be visible from the dining room and bedroom windows of some of the finished properties.

Northminster development surveyor, Alastair Gill, says: “We are integrating the original features within the re-development as a permanent reminder of the listed structure’s Victorian industrial past. We are pleased to be working with the AIA to conserve them as many similar artefacts have been lost from other historic maltings houses.

“The artefacts will add to the heritage feel of the homes. Not many people will be able to say that they have a seed-dressing machine by their front door!”

Civil engineer, Nick Beilby, a member of the AIA who is advising Northminster Ltd, says: “I’m providing basic engineering advice for the conservation including using engine oil for the iron work and belt dressing for the leather belting.

“Northminster Ltd should be applauded for the trouble they are taking. It would be very easy for them to have discarded these artefacts but they value the building’s heritage and have incorporated them into its future use. I’m sure that they will help to give the homes a special appeal.”

The refurbishment, which is retaining the original structure, is by York building company, Croft Farm Construction, and is scheduled to complete this autumn. York-based property and construction consultants, LHL Group Ltd, are project managers for the scheme.

Ben Hudson, managing director of York estate agents, Hudson Moody, which has been appointed to market the scheme, says: “The entrance showroom will enable the home owners to feel the history of the building and how it has evolved into modern contemporary living space in what must be one of York’s most sought after locations, Bishopthorpe ‘Bishy’ Road.”