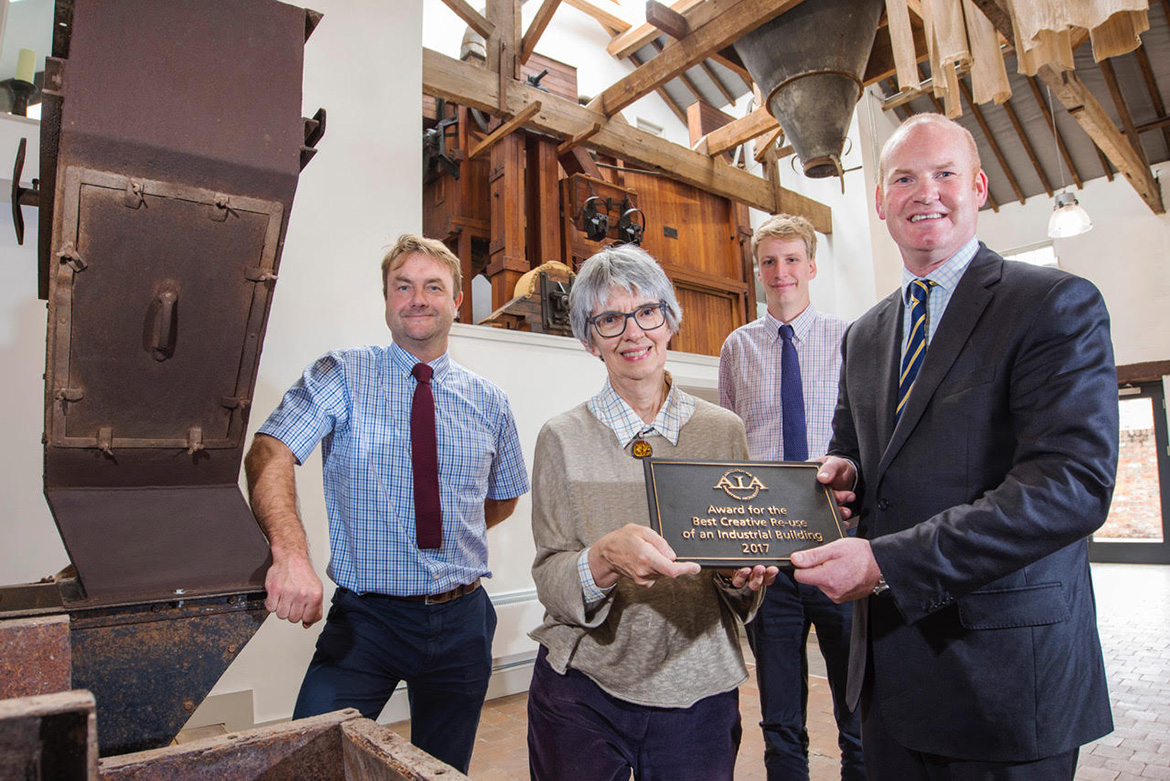 A third top award has been won by a York property refurbishment that transformed part of Yorkshire’s brewing heritage into six townhouses with an innovative display area for historic industrial artefacts.

Clementhorpe Maltings, a former Grade II Listed, 19th century malthouse, which had lain empty since the 1960s, has won Best Creative Re-use of an Industrial Building 2017 from the Association for Industrial Archaeology (AIA).

The scheme, backed by City of York planners, was carried out by York property developer, Northminster Ltd, and managed by property and construction specialists, The LHL Group, York, over nine months to January 2017. All the three-storey townhouses have now been sold.

Malthouse artefacts, including a double-bucket elevator, a large grain hopper, a grain-dressing machine, a cast iron steep and the kiln furnace for curing the malt, were salvaged and restored, with help from the AIA, and are in a special display area at the property’s communal entrance.

Co-ordinator for the AIA’s Creative Reuse Award, Amber Patrick, a maltings buildings specialist whose report persuaded English Heritage to list the building in 2001, said Clementhorpe Maltings won the award mainly for the conservation of the artefacts, especially as cast iron steeping cisterns and dressing machinery are rarely retained by developers.

Amber Patrick, the AIA’s endangered sites officer, said: “The judges were also impressed by the minimal use of new materials, the design, which retained as much of the original building as possible, such as cast-iron columns; new features, such as windows, being unobtrusive, and the fact that conversion into houses, rather than apartments, aided the stability of the building. This is one of the best maltings conversions I have seen.”

Northminster Ltd managing director, George Burgess, says: “It is a real thrill for the whole team that our commitment is recognised by other professionals. We are delighted to add this latest award to those from the RICS in the spring and are keeping our fingers crossed for the national award judging in November.”

LHL Group director, Richard Hampshire, says: “The Clementhorpe Maltings refurbishment was challenging but made exciting by the vision Northminster Ltd and COG Architecture had created for the property and it is very rewarding to have this recognised by a third award.”

Tadcaster Tower Brewery Company, which was formed in 1882 with the amalgamation of three local breweries, is known to have used the 10,000 sq ft malthouse from 1895 until the late 1950s.

Other key members of the Northminster Ltd team were civil and construction engineers, Topping Engineers, Harrogate and Croft Farm Construction.