Located on Lawrence Street within 2 minutes walk to the east of Walmgate Bar and the City Walls, Northminster purchased The Lodge & The Extern House at the former St. Joseph’s Convent on Lawrence Street, York in December 2017. The properties had lain vacant since the convent was closed in 2012 and had fallen into a state of disrepair.

In 2018 planning permission & listed building consent was granted to convert the existing buildings into 9 one and two bedroomed apartments along with a 2 bedroomed house. In addition, the development includes 4 single bedroom new build houses within the grounds.

Having had the pleasure of working on a number of historically sensitive buildings over recent years Northminster are delighted to be able to re-develop these important ecclesiastical Grade II Listed buildings. In doing so they are conserving an important part of York’s heritage whilst giving people a rare opportunity to own and live in a part of the former St. Joseph’s Convent that has never been accessible to the public in its 150 year history.

The Poor Clare Colettines are a reformed branch of the Order of St. Clare, founded by Clare of Assisi in Italy in 1211. This particular Order followed an interpretation of the Rule of St. Clare established by St. Colette in 1410, a French hermit and member of the Third Order of St. Francis. The Rule of the Poor Clares was based on strict Franciscan principles of extreme poverty. An established feature of the Order is Enclosure and the nuns were to go barefoot, enduring perpetual fasting and abstinence.

In 1864 the flourishing Poor Clares in Bruges, Belgium were asked by Lady Herries of Everingham Hall, York to establish a house in the city. Lady Herries was a prominent Catholic born into the Vavasour Family and married to William Constable-Maxwell, 10th Lord Herries of Terregles, who was an important benefactor of convents.

Sister Philomene and several sisters were sent to found the convent and were initially housed in Plantation House near to the site. In 1870 Lady Herries obtained and gifted the land to the nuns for the site of a new purpose built convent.

The ecclesiastical architect George Goldie was appointed and he produced drawings and supervised the works from the beginning. Born in York and trained in Sheffield, Goldie is best known for designing St Wilfrid’s Catholic Church in York in 1864, which is an elaborate Early French style with a tall west tower and vies with York Minster for attention.

Work began slowly in 1870 as funding had to be sought as they progressed; the first instalment was paid in 1871. Designed in a subtle Gothic Revival style, the contractors Weatherly & Rymer of St. Leonards Place constructed the buildings through to 1875. Goldie and Weatherly & Rymer had previously collaborated on the St. Wilfrid’s.

The first phase of the precinct wall was completed in 1872, The Sisters were ‘Enclosed’ on 7th June 1872. By 1873 the Cloister building was complete. Between 1873 and 1874 the Community Room was constructed. In 1874 the Choir and the Chapel was completed with additional funds from Lady Herries.

In 1874 the Extern was completed with the final of the original buildings, The Lodge, being completed in 1875. This marked the final phase of construction of the principle buildings on the site.

Th Extern offered a link between the Enclosed nuns and the outside world. The building housed the ‘Extern’ Sisters who were nuns who could interact with the outside world, as well as guests.

The Lodge, formerly known as the Priest’s House, was used as the domestic residence for the Priest who conducted the services of worship throughout the day. This building also served as a connection to the ‘Third Order’ with a meeting room that could be accessed privately from the rear courtyard.

The development which completed in July 2020 provides 14 residential units. These comprise a mixture of one and two bedroomed apartments and a two bedroomed house within The Lodge & The Extern. With 4 new build single bedroom two storey houses within the grounds.

The majority of properties are accessed by their own front door and are set within part of the original convent enclosure benefitting from a private secure setting with a mixture of private and communal gardens. Secure access is obtained through controlled pedestrian and vehicle gates.

Externally, The Lodge & The Extern are Grade II Listed properties constructed of traditional brick under a tiled pitched and pitched & hipped roof respectively. The new build properties are modern in design with Larch cladding and feature Velfac floor to ceiling glazing within the front elevations, under a pitched tiled roof. 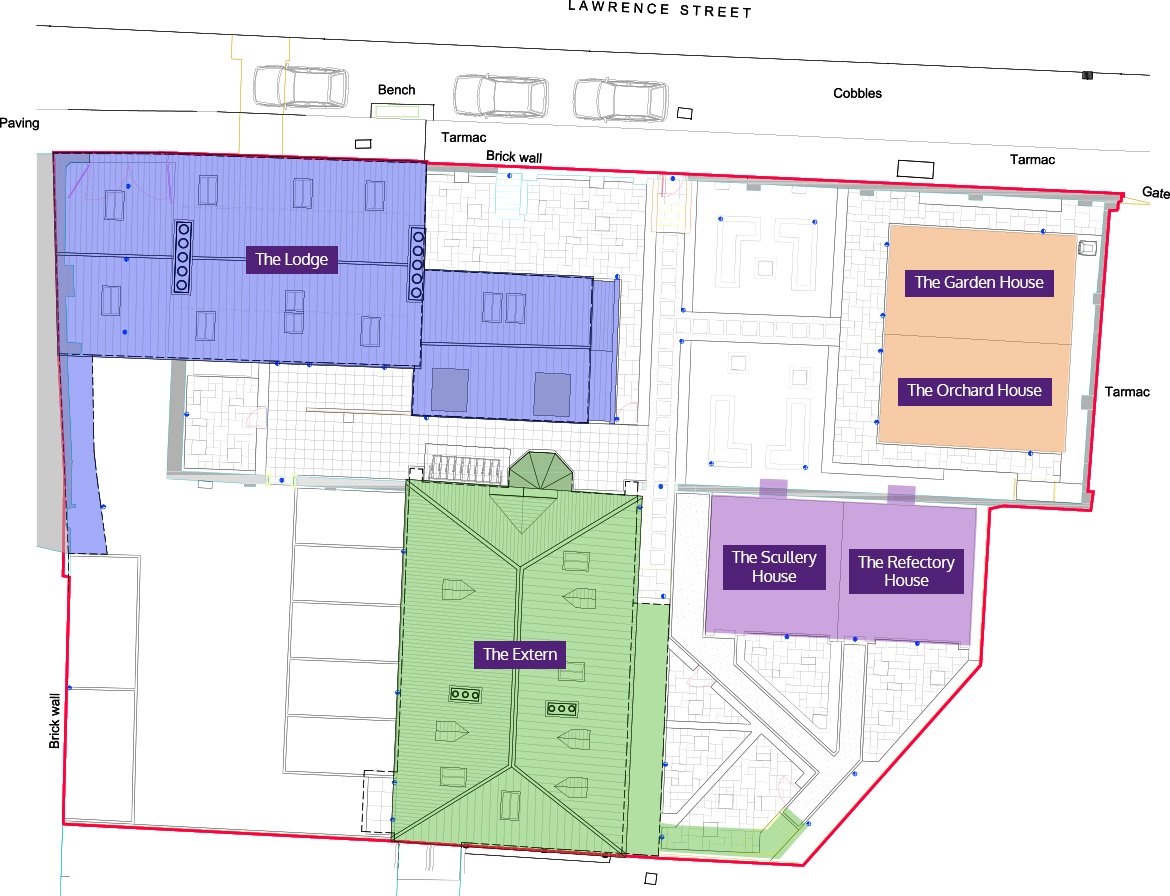 The former St. Joseph’s Convent sits to the southern side of Lawrence Street approximately 280m to the east of Walmgate Bar and hence is within a two minute walk of the City Walls and the retail and leisure conveniences of York City centre along with being a short distance to the Foss Islands Retail Park.

Lawrence Street itself provides easy access to the York inner ring road to the west and to the east forms Hull Road (A1079) which gives access to the A64.

The property is well served by public transport with bus stops situated adjacent to the property and it also benefits from being a short walk from many local retail facilities including M & S Simply Food, Waitrose, Morrisons, Lidl, Starbucks and Greggs.